Promoting to Kids to Build Relationships with Families

Pete Crouch of Eden Drug Health Mart in Eden, North Carolina, wanted a creative way to build long-term relationships with young families. Recognizing that many families in this town of 15,000 were struggling due to the economy, Pete saw an opportunity to help families by providing free school supplies. This involved reapplying an idea he heard about that had worked elsewhere.

With his wife, Pete proceeded to purchase as many school supplies as he could find from several stores in surrounding towns, filling shopping carts with pencils, crayons, paper, notebooks, scissors, glue sticks and more. He and his staff then stuffed these supplies into colorful backpacks that featured Eden Drug’s logo and tag line, “Providing Solutions for Better Health.” 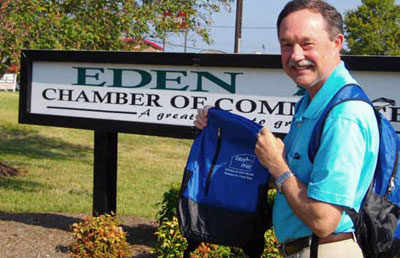 Pete showing off his backpacks.

While the total cost of the backpacks and supplies was just under $10,000, Pete convinced other companies like Pizza Hut, Sonic and a local gas station chain to join in and help defray part of that cost.

To kick off the 2010 school year, Eden Drug distributed about 1,700 free backpacks. Signage in front of the store, a press release picked up by the local papers and inclusion in a Chamber of Commerce newsletter helped make people aware of Eden Drug’s backpack promotion and draw them in. Each person who stopped in for a free backpack provided their name and contact information, which Eden Drug will use in future marketing activities.

But this promotion didn’t end when school started. Inside each backpack was a coupon for one year of free children’s vitamins, provided in bottles of 30 each to be refilled monthly. The idea is to make it a habit for parents to stop into Eden Drug for free vitamins for their children. (Pete is using low-priced generic vitamins from McKesson for his program.) Hundreds of parents are now coming in monthly to get free vitamins for their kids. Yet Pete didn’t stop there…if a family fills just four prescriptions per year, their children can receive free vitamins from Eden Drug for another year.

Even though this program takes money and effort, it has been great for Eden Drug’s reputation, relationships and business. Eden Drug has generated positive media exposure, good will in the community and increased traffic. Pete said, “Our business grew in a down economy, while offering our community a valuable service.” He added emphatically, “We plan to do this again next year.”