You have more political clout than you may think

The Big Idea:
Independent pharmacies have a voice and can impact legislation. Doing so requires being proactive, building relationships with elected officials and engaging in advocacy — as pharmacy owner Loren Pierce has done.

Independent pharmacy owners often believe they have little political influence and are at a disadvantage compared to chains and PBMs, which have extensive resources for advocacy activities.

Until recently, Loren Pierce, owner of Wender & Roberts pharmacies in Atlanta, Georgia, shared that view. Pierce had been in the pharmacy business for decades and had never engaged in any type of public advocacy. He said he largely sat on the sidelines and complained about how difficult and unfair the environment was, as opposed to taking any action to advocate for change.

From the sidelines to the state capitol

Pierce’s attitude toward political advocacy started to change while attending McKesson ideaShare a few years ago, where he heard how independent pharmacies in Indiana had been involved in advocating for legislation about PBMs’ audit practices. Among its provisions, this legislation strengthens the standards related to PBM audits and requires that PBM audits of pharmacies allow reasonable time frames.1

Inspired by what transpired in Indiana, Pierce became involved in advocating for an audit bill in Georgia, which contained similar provisions to Indiana’s bill. He contacted his local representative and began educating legislators about the need for this bill. He ended up going to the state capitol, speaking to various legislative committees, educating them about the importance of this legislation, and helping get the legislation passed.

Pierce also personally reached out to his state representatives about the importance of expanding the scope of practice to allow pharmacists to provide immunizations. This type of grassroots advocacy was a factor in the passage of another state bill.

Just a few years ago, Pierce could never have imagined becoming so involved in public advocacy and having such an impact. “It has been an eye-opening experience,” he explained, “but we have to get involved.” Having participated in getting two important bills passed in Georgia, Pierce observes, “We [independent pharmacists] carry more clout than we think we do. We have to make our presence known.”

All politicians — especially state and local officials — want to be seen as supporting entrepreneurial small businesses, supporting the local community and increasing access to healthcare, all of which independent pharmacies do.

Pierce believes emails and letters are fine ways to communicate with elected officials, but making the effort to build personal relationships is far more effective. In Pierce’s experience, local officials will usually take your call because they want to hear from constituents like pharmacists, whom they see as important, appreciated, trusted members of the community. Pierce advised, “Pick up your phone. Call them. They appreciate us as an important part of the community and they will listen.”

Independent pharmacy owners can position themselves as both important small-business owners and experts on local healthcare who can play an important role in keeping elected officials informed on local health issues. Building this relationship involves treating an elected official like a customer. Nurture a relationship, invite them to lunch, host them on a store tour, and possibly support their campaign. Nurturing a relationship in this way helps ensure that elected officials are aware of issues that matter to their community and that pharmacists’ voices are heard.

Grassroots advocacy in California helped with the passage of California Senate Bill (SB) 493 in 2013, which expanded the services that can be provided by licensed pharmacists. Advocacy involved hundreds of emails and letters to lawmakers, writing editorials in local papers, hosting elected officials on pharmacy tours, and organizing a rally with over 600 pharmacists at California’s state capitol. For more on how California pharmacists mobilized support to pass landmark scope-of-practice legislation, see Grassroots Efforts Advance the Pharmacy Profession. 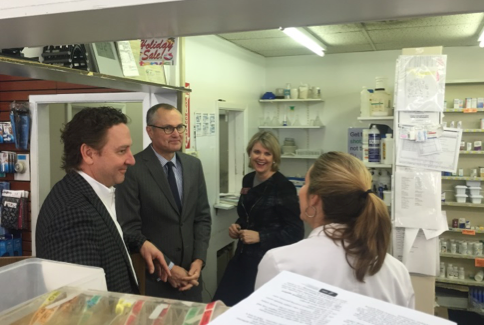 Lt. Governor Cagle, who comes from a small town in Georgia, is aware of the important role independent pharmacies play in the community. During the visit, Cagle saw firsthand the impact of recent legislation that expands the types of services provided by independent pharmacies and improves access for patients. This occurred when a customer arrived during the tour and asked for an immunization, which was completely unscheduled.

After the tour Cagle remarked:

“I enjoyed the opportunity to tour Loren Pierce’s Wender & Roberts Health Mart Pharmacy and speak to his employees. … Health Mart provides key support to independent pharmacists like Loren. It’s essential that all Georgians understand the importance of engaging with their elected officials and informing us on the issues they face. I continue to support small businesses in our state as they provide the jobs and services that Georgia’s citizens need and deserve.”

Pierce’s goals for the Lieutenant Governor’s visit were to continue the ongoing process of building relationships with elected officials, and to show — rather than tell — the important role that independent pharmacies play in healthcare and in the local community. This relates directly to efforts in many state capitals related to expanded scope of practice. 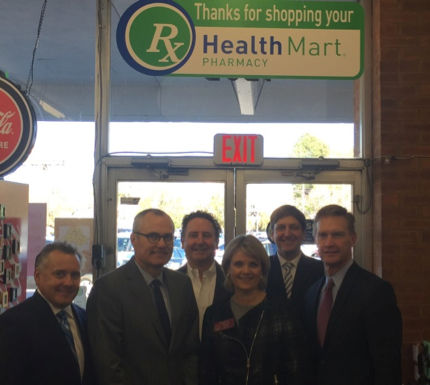 As the nation’s largest healthcare services company, McKesson Corporation recognizes its responsibility to participate in the public policy process. McKesson has a 13-person Public Affairs team that builds and maintains working relationships with elected and appointed officials at every level of government from Washington, D.C., to state capitals, to city halls across America.

Public Affairs objectives are to influence the development of public policy and its outcomes, educate federal, state and local policymakers about McKesson’s healthcare businesses, establish and build relationships with public officials, provide government relations counsel and expertise across the corporation to achieve the company’s strategic objectives, and coordinate communications with government officials.

Each year McKesson tracks over 3,000 (of the approximately 150,000) proposed bills at the federal and state levels that are the most relevant for McKesson and its customers. The team encourages policymakers to visit McKesson facilities and customer sites to witness firsthand how healthcare businesses and innovative solutions improve the quality and delivery of care while removing unnecessary costs.

In addition to information and tools, McKesson’s Public Affairs team hosts webinars and town halls, including guided tours of their Vision Center in San Francisco, CA. When possible, they also help connect customers with elected officials, such as assisting in coordinating Lt. Governor Cagle’s tour of Wender & Roberts.

For more information about or assistance from McKesson’s Public Affairs team, contact publicaffairs@mckesson.com with questions, and don’t hesitate to contact your McKesson sales representative.

Be your own best advocate

Take Loren’s lead in advocating on issues of importance to independent pharmacy and building relationships at the state and local level. And, in doing so, take full advantage of the information, tools, resources and assistance McKesson provides.

Having the opportunity to host the Lieutenant Governor — who already had some knowledge of independent pharmacy — to show firsthand how independent pharmacies serve local communities is the start of positive change going forward.