About five years ago, a mother told the staff at Barrett Health Mart Pharmacy and Variety in Watford City, North Dakota, about her child’s fear of monsters. Pharmacist Jeffrey Dodds gave her an inexpensive spray bottle with colored liquid and a prescription label that said “Monster Spray.” The instructions: “Spray around the room at night before bed; repeat if necessary.”

To help other parents, the pharmacy put an apothecary bottle labeled “Monster Spray” on a shelf, and over the years a few parents requested the spray for their preschoolers, said Josslyn Dodds-Finck, the store manager. “We don’t charge them.”

But after one mom mentioned Barrett Pharmacy’s “Monster Spray” on Facebook, a picture of it spread around the world.

The Power of a “Prescription” from a Pharmacy

In late 2013, Kelsey Greenhaw and her husband finally had their one-year-old son sleeping through the night, when their three-year-old daughter Maddie developed a fear of a green monster, which Greenhaw thinks may have come from watching the Grinch. “Therefore, I now still wake up multiple times in the night,” Greenhaw told her friends on Facebook. “I have tried spraying ‘Febreze monster spray’ and praying. Which works but not long enough. So just trying to get more ideas of what to do. Any advice appreciated!”

Her friend Austin Johnson works at Barrett Pharmacy and dropped off a bottle of the pharmacy’s own proprietary “Monster Spray.” “Maddie was impressed because she thought the doctor had sent it for her [because of the prescription label],” Kelsey Greenhaw explained in an email interview. “She could also recognize her name on the label [so that] made it even more legit.”

Around Dec. 21, 2013, she let her Facebook friends know the pharmacy had provided the solution to the monster problem, and the post received about 100 likes. But one of those friends must have shared it. In early March 2014, a photo of the pharmacy’s “Monster Spray” went viral on social media. 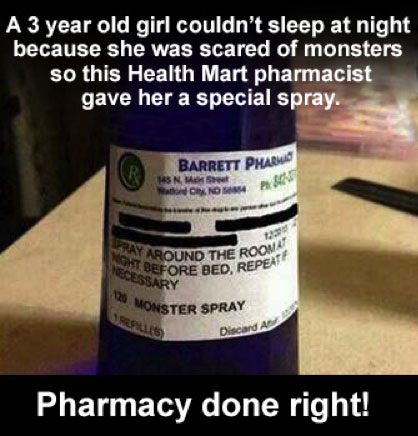 A radio station in Evansville, Indiana, posted the image* on its Facebook page on March 7, with a note that said “Hiip HIP Hooooorrrraaaay: TODAY is doctor and nurse appreciation DAY!!!” Within three days the post had more than 245,000 likes and 71,000 shares. The image was popping up on Twitter, Pinterest, and more. On the Imgur site the image of the spray showed more than 720,000 views in three months.

The response was overwhelming for the pharmacy. On the Barrett Pharmacy and Variety Facebook page, people from as far away as New Zealand have posted comments such as, “Well done!” “Very cool!” “What a fantastic bunch of people you must be,” and, “It just warmed my heart!” One person wrote, “I wish my pharmacy did that!”

“We had to mail a bottle of Monster Spray to New York,” Dodds-Finck said, because someone had seen it online and called the pharmacy.

Of course, long-distance kudos won’t necessarily translate into more business in North Dakota, but the local newspaper scheduled an interview with the pharmacy staff for a story. Local residents were already talking about the pharmacy’s service before the social media explosion. A month before the “Monster Spray” went viral, a resident had given the pharmacy a five-star review on Facebook with the comment, “I love how all of the employees go out of their way to help.”

Although the “Monster Spray” label includes one refill, nobody has asked for one. “It apparently does the trick,” she laughed.

Use Social Media to Your Pharmacy’s Advantage

Most social media sites are free and easy to use, and an enormous amount of information exists online about how to get started with social media or improve what you’re doing. Check out these past Smart Retailing Rx articles:

You can also download our free guide to “Building a Strong Customer Base with Online Marketing.” And if you’re a Health Mart pharmacy, or thinking about becoming one, contact McKesson to learn more about the Facebook subscription service that’s part of Health Mart’s local marketing program.

DISCLAIMER: The information provided here is for reference only and does not constitute legal advice. We make no representations with regard to the content’s comprehensiveness. You are solely responsible for investigating and complying with all applicable laws that govern the operation of your business.

*The original meme that appeared mentioned that the girl was 6 and referred to “doctoring done right.” This meme has been revised to indicate she was 3 and her “prescription” came from her pharmacist.