Building a business together can be a great accomplishment for a couple, but owning and operating a pharmacy with your spouse isn’t for everyone, as work stresses can be significant.

Family and work are the two most important parts of a person’s life, so guard against having trouble in both areas at once, advises Lisa Brateman, LCSW, a psychotherapist and relationship specialist in New York City.

Since the recession, she has seen an increase in couples owning businesses together. To decide whether that is a good option, she suggests answering two questions:

Pharmacists can make it work

Pharmacists Jody and Adam Reel were married in 2008 and bought Sabetha Health Mart in Kansas in 2011. Now having their own pharmacy, they see benefits their spouse brings. “Adam brings constancy and dependability,” Jody says. “He’s really the rock of the pharmacy for everybody, the voice of reason.” Adam recognizes Jody’s enthusiasm and drive for the business. “She’s really passionate,” he says.

The community appreciates the family atmosphere at their pharmacy, where the Reels’ first-grader comes after school and has a snack. 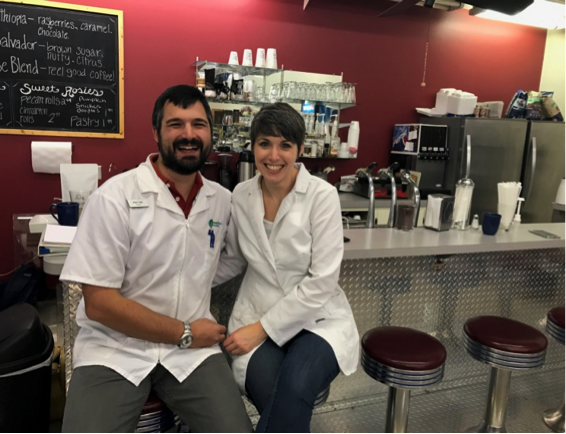 If you do join your personal and work lives, set limits. “Talk about where one begins and the other ends,” Brateman says. For example, make a plan for who will do what.

Sabetha Health Mart doesn’t have enough business yet for two full-time pharmacists, so while Adam is the pharmacist in charge, Jody has flexibility to work on advocacy with the state pharmacy association, serve as a consultant for a long-term care facility, and work as a fill-in pharmacist in other stores. “I chain Adam to the counter, and I run and play,” Jody laughs.

Among their pharmacist friends, the Reels know couples who own multiple stores, and the wife and husband take responsibility for different locations.

Even though you may spend all day together, set aside time to talk about the business, keep each other informed and resolve any conflicts. Brateman suggests scheduling a half-hour meeting every week.

When the Reels need to talk about the business, they joke that it is “date night.” They order dinner out, record it as a business expense, and talk about their game plan for hiring, training, or topics such as whether it’s time to redo the floor. Communication is central to making working together work. “It’s about being honest with each other,” Brateman says.

Work shouldn’t dominate family time. If all of their parents’ dinner conversations are about the pharmacy, Brateman said, “kids think all they care about is their work life.”

“I don’t talk about work when I am home,” Adam says. “And Jody is getting better at that.”

The Reels use humor to help deal with the stress at work. “I use comedy to defuse a situation,” Jody says. The bottom line when there are disagreements about how to handle a work situation, Brateman says, is: “What makes sense for the business?”

Sometimes a conflict is a power struggle, she says, and what the couple actually is arguing about is not the issue at hand, but who wins.

Brateman also advises couples to do something other than work. If all you do is work, “Then all of a sudden you’re just business partners.” Brateman also stresses the importance of having some time away from each other.

Finally, relationships change over time. Just because you organize the work one way doesn’t mean it has to stay that way. “I think it will continue to evolve as long as we own a pharmacy together,” Adam says.

Good news from researchers
Starting a business together can improve your family income without negative side effects, one study suggests. An Institute for the Study of Labor report on more than 1,000 Danish couples found that income for both partners rose significantly when they went into business together. The study also found that couples in business together weren’t any more likely to separate or divorce than other couples.

Note: The information provided here is for reference use only and does not constitute the rendering of legal or other professional advice by McKesson. Readers should consult appropriate professionals for advice and assistance prior to making important decisions regarding their business. McKesson is not advocating any particular program or approach herein. McKesson is not responsible for, nor will it bear any liability for, the content provided herein.