Create a pharmacy that welcomes diverse patients and staff

Diversity is on the rise — in communities and pharmacies

The patients walking into your pharmacy today may be very different than in previous decades, as the racial, ethnic and demographic mix in the U.S. has changed.

In addition, since 2010, almost 70% of America’s largest cities have become more racially and ethnically diverse.2

Over the past decade, the face of pharmacy has also changed.

Programs such as RxOwnership’s Women in Pharmacy — Own It are giving women pharmacists the mentors and other support to go even further.

The progress being made in pharmacy is intentional. While many high-profile companies recently launched diversity initiatives, in 2016, the American Association of Colleges of Pharmacy issued a statement on diversifying pharmacy’s human capital:4

“AACP affirms its commitment to foster an inclusive community and leverage diversity of thought, background, perspective and experience to advance pharmacy education and improve health.”

While progress is being made in communities and in pharmacies, challenges remain. Data from the 2019 National Pharmacist Workforce Study5 shows:

Joan Kim, a Korean American pharmacist who co-owns four pharmacies in Washington, DC, has heard racial slurs on the street and at work, most recently with someone making a remark about the coronavirus. Before moving to DC, Kim encountered hostility from high-income customers at a pharmacy in New York City where “they screamed at me to go back to my country.”

Clearly, with so many negative experiences in just the past year, more strides are needed.

Grubb’s Pharmacy: An example of diversity in Washington, DC

Grubb’s Pharmacy, owned by Joan and Michael Kim, is Washington, DC’s oldest pharmacy, in business since 1867. 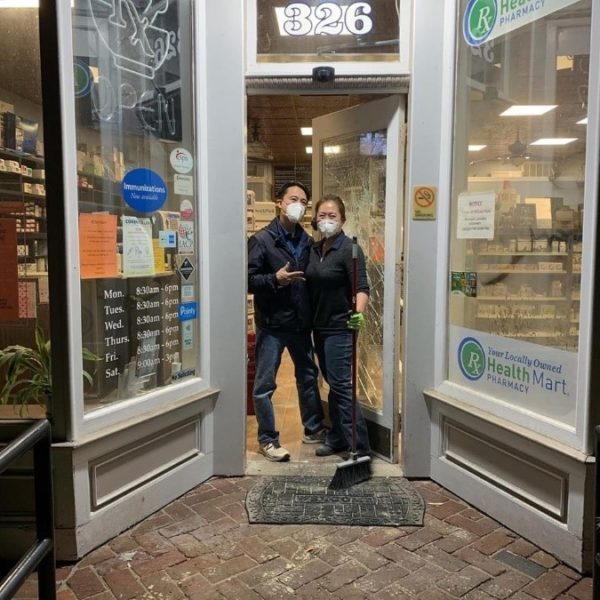 The Kims’ other pharmacies are:

Michael Kim observed, “It amazes me how diverse the patient population is,” as Grubb’s flagship location serves the most diverse patient population ranging from members of the U.S. Congress and Supreme Court to the homeless, and everyone between those extremes.

Promoting diversity within the pharmacy

How to rebuild from unrest

Many businesses faced vandalized storefronts and damage during the protests and riots that shook the nation earlier in early June 2020 — including all four of the Kims’ pharmacies. But the Kims and the community responded.

By creating a diverse, supportive environment where pharmacists and staff show compassion for patients, at a moment of need the diverse community stood with and supported the Kims.